Since departing Williamsburg, VA in July, we have covered a lot of ground in the past month. Looking back, it’s amazing at the number of states we have traveled through and the number of places that we have visited. Although it’s been a whirlwind summer, Dave remarked yesterday that it’s been one of the best summers that he’s had.  Mission accomplished! Yay!!

After departing Williamsburg, VA on the 14th of July, we headed for Gettysburg, PA so that we could visit the Gettysburg National Battlefield. We spent two days canvasing the battlefield, soaking up as much knowledge as we could about one of the most important battles in our history. Simply amazing! I’ll share some of the history in a separate posting for those that are interested in history.

We left Gettysburg, PA on the 17th of July and headed for Country Hills Campground in Marathon, NY. We had been to this campground previously and decided to spend the weekend there just to relax and unwind. It’s a beautiful campground with a stocked lake, very peaceful, and the owners are simply wonderful.

After relaxing all weekend, we packed up on the 20th and headed for Vermont to spend a week at Lake Champagne Campground in Randolph Center, VT. Although I wasn’t as pumped about visiting the north-east as Dave was, I have to admit that once we got to Vermont, I was glad that we had made the trip. The scenery is beyond breathtaking!  While we were in Vermont, we did a lot of sightseeing, although as I like to joke, we ate our way across Vermont! We did the Ben and Jerry’s factory tour (sorry Tom!) to see how ice cream was made. The tour costs $4 per person was about 30-minutes long. At the end of the tour, one was treated to a delectable sample of the ice cream of the day that they were making. There is an ice cream counter outside of the facility that one could buy ice cream at as well, ranging from ice cream cones, $4.50 a cone, to ice cream buckets….yes, I said BUCKETS…..that will feed a large group of people and costs around $40. We decided to forgo the additional sugar buzz and visited the cemetery of where past Ben and Jerry’s flavors are laid to rest. 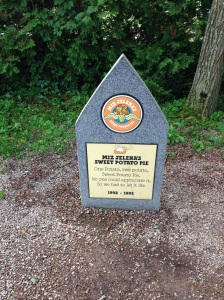 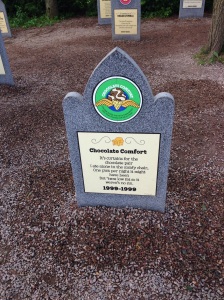 For more information on Ben and Jerry’s Factory tour, go to http://www.benjerry.com/about-us/factory-tours.

Next, we set our sights on the Cold Hollow Cider Mill to see how cider was made. Unfortunately the mill was closed while we were there; however, they had a video playing to show the process of making cider. Pretty interesting! We had a sample of their cider, VERY TASTY, and I bought a cider flavored doughnut from their bakery for the two of us to share, also VERY tasty! They also have a luncheonette on-site, but we didn’t eat there as I was too tempted by their bakery. For more information on the Cold Hollow Cider Mill, go to http://www.coldhollow.com.

We thought we would wind up our sugar coma inducing day by visiting the Morse Farm Maple Sugarworks to see how maple syrup and other sugary delights were made. Since it was off season to see the process of how maple sugar is collected (hint, it’s collected in the fall), we were treated to an educational film on the process. I never realized before how much work actually goes into the production of making maple syrup. Wow! Very neat indeed! Inside of the store, one can taste numerous samples of maple syrup from Grade A Golden (light syrup) to Grade A Very Dark (as the name implies, very dark syrup), maple kettle corn, maple cream, various jams and jellies, and the list goes on! More information regarding the Morse Farm Maple Sugarworks can be found here at http://www.morsefarm.com.

The following day, we decided to break the sugar cycle and see something that didn’t involve foods so we set out to see the Rock of Ages quarry in Graniteville, VT. Now I’m sure that our friends in Bloomington would be questioning as to why we went to a quarry where we had to pay to tour it, when we previously lived about a half mile from a quarry and could have gone there instead for free. The answer to that question is that I have no good answer. What I will say is that if ever one is in the area, one needs to see this quarry and the factory where the sandblasting is done. Just incredible! The tour, which is about 40-minutes in length, is pretty inexpensive at $6.00 for adults, $5.50 for seniors over the age of 62, and $2.75 for children between the ages of 6 and 13. One can stay inside of the factory and watch the craftsman for hours if one wanted to, or for an additional fee, one can try their hand at sandblasting a piece of granite to take home as their own personal souvenir. We decided to forgo the sandblasting experience ourselves and instead headed to the only granite bowling alley in the world on the other side of the factory. The bowling alley was developed as a prototype in 1958, but the concept never took off. 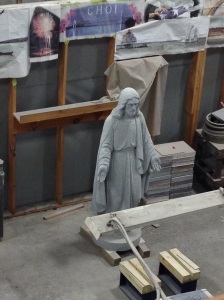 Go to http://www.rockofages.com/en/visitors/overview for more information on Rock of Ages.

After leaving Rock of Ages we headed to Hope Cemetery in Barre, VT, a few miles down the road from the Rock of Ages quarry to see for ourselves the numerous creations that the artisans at Rock of Ages created. Just amazing! 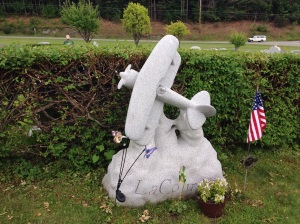 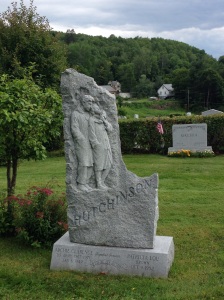 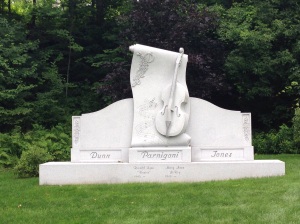 A trip to Vermont would not complete without visiting the Cabot Cheese Factory, so we jumped in the car the following day and headed to Cabot, Vermont, about 45-miles north-east of Randolph Center, VT, and a beautiful drive. Cabot is owned by 1,200 dairy farm families throughout New York and New England, operating four plants in three states, and employs over 1,000 people. All of the proceeds from the Cabot sold products are returned to the farmers.

The tour itself takes about 20-minutes and costs $3.00 per person, although children under the age of 12 are free. It’s really neat to see the actual production of cheese being made. Samples before and after the tour are highly encouraged and, oh my, the samples that they had were unbelievable! They had the usual cheeses like, sharp, extra sharp, Colby jack, and Monterrey Jack, but they also had some awesome flavors like chipotle, tomato basil, horseradish, hot habanero, white oak cheddar, garlic and herb, everything bagel cheddar cheese, Tuscan cheddar cheese, hot buffalo wing, and my personal favorite, McCadams Adirondack Wicked Sharp Cheddar Cheese, which is a deep sharp cheddar and is produced by a sister company of Cabot’s in upstate New York. OH MY GOSH!!! We bought a 2-lb brick of this one. For additional information on Cabot, please visit https://www.cabotcheese.coop/visit-us.

We decided to drive from Randolph Center, VT to Burlington, VT about 2-hours north-west of where we were staying and take a cruise along Lake Champlain. We had a beautiful day for it and the cruise, which was 90-minutes, was wonderful and the scenery was awesome. We rounded out our trip to Vermont by stopping in at the Lake Champlain Chocolate shop before leaving Burlington. Unfortunately, tours of the chocolate factory are only offered Monday through Friday, and since we were there on Saturday, we didn’t get to see how chocolate was made. We were able to take part in the chocolate sampling though and they encouraged a LOT of sampling! We sampled white, milk, dark, and semi-sweet chocolates that were so smooth that it melted in one’s mouth. Simply mouth-watering!!

Our adventures of living full-time on the road exploring the U.S.